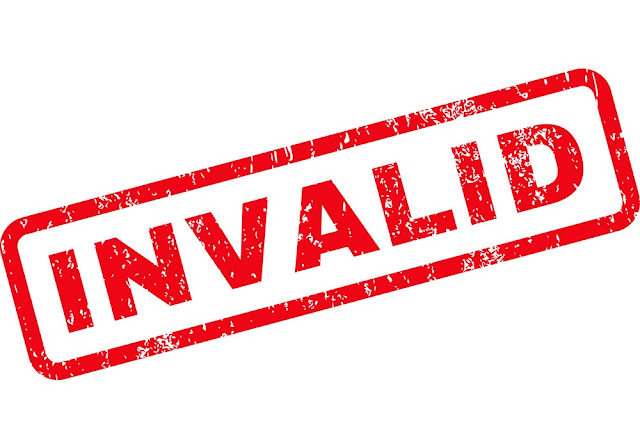 Knowing Google Adsense Invalid Click Activity - That is, there are activities or clicks on Google Adsense ads on your pages that are not recognized by Google because they do not meet the criteria for clicks (and impressions / traffic) required.

This is the definition of the Invalid Click Activity  according to Google :

Invalid click activity consists of any clicks or impressions that may artificially inflate an advertiser's costs or a publisher's earnings, and for which we decide not to charge the advertiser. This includes, but is not limited to, clicks or impressions generated by a publisher clicking on his own ads, a publisher encouraging clicks on his ads, automated clicking tools or traffic sources, robots, or other deceptive software.

Invalid click activity consists of any artificial or fraudulent clicks or impressions that can swell the costs that must be borne by the advertiser and publisher's income, and therefore we decide not to charge the advertiser. This includes, but is not limited to, the clicks and impressions made by the publisher itself, the publisher who intentionally encourages clicks by others [ for example: making the title "Click Advertisements Below", click socialization, and the like -azmi ], device automatic clicks or sources of traffic, or other fraudulent software.

The most common cause is " click bombing ", which is to click repeatedly on Google Adsense ads on a page / several content intended to make a Google Adsense account banned. This is an unfair and evil action, usually carried out by people who are jealous or have problems with the account owner.

Another reason is the activity of self-clicking on ads; usually because they are impatient with low Adsense earnings. Or usually also because of "click socialization", which is some Adsense account owners "conspire" to click each other.

What is rare but happens is that the Adsense code is installed by someone else on the website / blog that is completely unknown to the account owner. Usually the code is "stolen" through source code and installed on other websites / blogs. Even though the website / blog that has Adsense ads installed does not qualify for Adsense : bad content, adult content , content that violates copyright , and the like. It could be that the account owner actually has no problems, but the "enemy" of the person who has stolen and installed the Adsense code is eyeing and doing Click Bombing.

The above activities are easily detected by the Adsense engine because of certain patterns, which are then developed and concluded as invalid activity. The next action is several, based on the level:

1. Assume certain activities or clicks are invalid and do not provide CPC values ​​(0.0)
2. If it is known later, then the CPC value that has been given will be withdrawn.
3. If it occurs in a condition that is considered a bit severe, a warning will be given.
4. If it occurs in an amount that is outrageous or has experienced several times the same problem, the website / blog is banned even in certain stages the account will be banned completely.

Points one and two usually occur automatically, only involving the Adsense engine. While points three and four involve Adsense staff and are done manually.

Unfortunately, not all Adsense account holders are aware if the possibility above can occur. One problem is ignored without being noticed and without anticipation or improvement. Then the problem after the same problem occurred until finally the owner of the account found his account was banned. This usually happens if the tool to see invalid activity is minimal; as well as the means to repair it.
Especially for Blogger, there is no tool to check invalid activity, because the statistics traffic feature is just a little. There is no complete record. We must use external tools such as Google Analytics and other tools to detect invalid activity. And I am very sure that not all Adsense account holders want to analytically view unnatural traffic and visitors, because obviously it will take a lot of time.

Therefore, knowing the characteristics of invalid activity is very important , because after knowing that something is wrong, the account owner can take the necessary action before getting a warning or even before the website / blog and account is banned.

Here are 4 characteristics of Invalid Click Activity on Google Adsense:

1. CTR or Click Through Rate , average number of clicks and number of pageviews above 10% . Although in the range of 10% invalid activity does not necessarily occur, but it must be watched out. Because CTR rarely reaches 10%, even by large, high traffic websites. Although a 1% or 2% CTR is considered very low, don't have fun first because CTR is above 10%, because that is an indication of irregularity. CTR around 5% is arguably very good. Oh yes, in Indonesian CTR is called CTR ( Average Click and Display ).

2. You suddenly get a lot of clicks but the most value clicks $ 0.0 , meaning that it doesn't generate earnings at all. For example, you get 30 clicks but the total value is only $ 0.05 or even $ 0.0. This means that the Adsense engine does not provide value for a large number of clicks obtained; while giving an indication to Google (and you) that something went wrong happened.

3. Earning rises dramatically, but not long after it drops dramatically too. For example, you get $ 2.45, but soon it changes to $ 0.45. This means that the detection of invalid activity is a bit slower because it has to go through several processes, then it is concluded that a number of invalid or invalid clicks. This is not the fault of the Google Adsense engine, but rather intentional actions caused by irregularities.

4. You get a lot of clicks from a region (usually a country) with very small pageviews. The analysis requires traffic analytics like Google Analytics or Statcounter, if you use Blogger. If you use your own server, AW Stats as a complementary feature of cPanel is powerful enough to use. Google uses a paradigm that if a visitor clicks, surely he is very interested in the ads that are displayed. This possibility is not big. If it is interpreted as a CTR comparison, then this is how you say it: " Out of 1000 unique views maybe only  (at most)  10-20 unique views that contribute to ad clicks". If the click happens far beyond that paradigm, then suspicion will arise.

The action is usually there 2. If this happens only one or two times, usually the staff will silence and "forgive". That is, errors may occur purely by visitors and are beyond the ability of the account owner. But if it happens many times, it means the account owner is not aware and does not try to fix it. If so, more serious conditions such as warrants and bans can occur.

What will have to be if you get a warning or a website / account is banned? Obviously need a separate discussion because it is impossible for 200-300 words to represent. But the point is, preferably before that happens, do the following anticipatory actions:

1. Immediately take important actions after knowing something is wrong . For example, first stop showing ads on website A to be conducive. Unfortunately, on Blogger we cannot banned IP directly (with features / console), so that the temporary termination of the broadcast is quite the best solution.

2. Make sure to use the "permitted site" feature , so that the ads displayed by irresponsible people on other sites will be ignored by Google.

3. Check Adsense statistics regularly and periodically to see the possibility of invalid click activity. do not let it go up several times.

4. Install the extension (Chrome) Adsense Publisher Toolbar or install the Android Google Adsense application  to be able to check in realtime, routine, and fast without entering the dashboard.
Facebook Twitter Telegram